And so, we address the second half of 'Not-Particularly-Scary-Multiplayer-Focused-Sci-Fi-Action-Horror Fortnight' with Aliens: Colonial Marines. "Oh Yahtzee, we're looking forward to hearing your opinions on this one!" trilled several correspondents this week, and then they ran away like they'd just lit a firework or pushed a friend into the girl's toilets or thrown an unwanted child into a pen with a scary dog. Oh, I see! No-one wants me around when the new Call of Duty is training you to ignore yet another quality recognition instinct, but the moment something comes along that offends what few atrophied taste buds you have left, then suddenly I'm your personal attack gopher! Well, how do you know I don't actually really like Colonial Marines?! I don't; it's fucking atrocious, but you'd have looked pretty silly if I had, wouldn't you!?

Maybe I'm just feeling slightly bitter because everyone involved in the game's development has been doing my job for me since it came out, desperately trying to blame the seventeen other companies involved in its creation like a row of schoolchildren attempting to deduce who dropped the really eggy fart. It's clear that Colonial Marines is just the vapour coming off a big pot of shit stew that has been bubbling resentfully away for a very long time, but if you ask me, the starting concept itself is questionable. My reading of Aliens was that the marines in the film were supposed to be all mouth on the surface and cotton Y-fronts underneath, mostly slaughtered within minutes so that token sensible person] [http://avp.wikia.com/wiki/Ellen_Ripley Ripley is left to wipe their bumsies, and a game about them would be like a Blues Brothers game in which you play as the police.

Set several months after the events of the film, Colonial Marines has its eponymous jarheads show up in response to the distress signal left by Hicks from the film, to officially call "DO OVER," kill all the aliens, and take it in turns to do that thing where you stand with one foot upon a defeated enemy and gaze into the middle distance with hotties clinging to your knees. When Hicks actually shows up in person with a cringingly awkward retcon for his meaningless death in the films, played by the original actor with a voice sounding like an 80 year old chain smoker reading off the label on his medication bottle, we realise we are playing fanfiction. The kind that's happy to completely miss every point going, as long as its favourite characters look cool.

But nevertheless, there was the possibility of a solid game in the concept. Aliens is quite an old film, and seems a bit low-tech now; all LCD displays and CRT monitors under smokey blue floodlights, and when I first started Colonial Marines, I thought they'd captured that '80s grungy sci-fi look quite well, and then I thought, "How clever of them to continue the retro theme by having the graphics and environment design look about eight years old." But I'm the guy who's always saying that a strict insistence on cutting edge graphics for AAA games has proven detrimental to their depth and quality, so I almost applauded that.

I only started tasting the worm in this handful of worms that long ago in some forgotten design document might once have been an apple when I got a load of the character animation and was asked to shoot hideously inaccurate weapons at enemies that jumped from pose to pose like the annual puppet show at the Parkinson's disease clinic in an imaginative variety of environments, ranging from blue-grey corridor, through other blue-grey corridor, to blue-grey hangar, that looks like we're staring lovingly up a PlayStation 2's butt-hole. And after that, Colonial Marines just keeps revealing new butt-holes with which to soil itself.

I made the mistake of thinking that at least aliens are more interesting to fight than the endless streams of human soldiers plinking away from behind cover that the majority of shooters offer, whereupon Weyland-Yutani mercenaries showed up to plink away at me from behind cover, Weyland-Yutani now of the opinion that an uncontrollable biological weapon that reliably wipes out their science teams en masse is totally worth openly declaring war on their own country's military for. Christ knows how Weyland-Yutani spent their time before the aliens were discovered; probably threw children on piles of burning money.

None of the marines seem particularly surprised when they do show up, which may be because they're all being lulled into a doze by the gentle puffs of lukewarm air emitted by all the grenades. I've used staplers with a more satisfying impact than most of the weapons in this game. Strangely, the assault rifle always makes the sound of firing in short bursts, even when it's firing continuously, and sometimes the sound drops out altogether (although this may be intended to alleviate how fucking grating the Aliens assault rifle sound effect gets when you're hearing it from about five different sources for 90% of the game).

Against my usual instincts, I actually played some of the four player co-op, if only to have someone to play "guess when the texture's gonna pop back in" with. And it was rather entertaining when those stiff faced NPCs with about as much capacity for emotion as a paper plate with three sausages on it would be trying to have a confrontational dialogue moment, and we'd crowd around them chanting, "KISS HER, YOU FOOL!". But with four players, and almost always two or three NPCs tagging along, it's hard to feel much drama when you outnumber both the enemy and the local wildlife. And tight claustrophobic environments are not the best place for the marines to throw a gay pride parade, so many a doorway saw re-enactments of Three Stooges routines.

Shitty optimisation brings shitty loading times, and with the old trick of disguising the loading screen as a door or an elevator with an unusually drawn out opening mechanism, there were many lengthly awkward social moments with seven hardened marines piled up against a flashing door waiting to be let in to the next bit. And there are only so many times that saying, "Who farted?" can break the tension.

And just to put the cherry on it, the game's buggier than a big bug, bugging out in a dune buggy. Why not share your favorite glitch in the comments? Mine was when I think we were supposed to be running away from this big boss alien, but we couldn't because one of our NPC friends was blocking the door, I guess until we said sorry for taking the piss out of his porno-stache. But then the boss alien stopped moving in the centre of the room over one of our fallen comrades, and whenever we tried to revive that comrade he'd briefly come to life to smack the poor bastard back into a prone state. "Hey, you're supposed to be chasing us, boss alien." "Naah, I'm alright. I'll just have this one marine. Meet you at the power loader for the shitty boss fight, yeah?"

So, Colonial Marines is pretty much a wash. But without meaning to absolve the developers (they get ALL the blame for this fucking train wreck as soon as they figure out how to divy it up), what gets me are the Aliens fans who have been declaring it "the final betrayal". Have you seen literally anything Alien related, post-Aliens-the-film?! Your sweetums has been putting it about for decades, guys! The betrayal ship has sailed, circumnavigated the globe, and returned to port laden with exotic spice!

The Arabic text on the last frame (see below) spells "salam alaikum" and translates to "peace with you", a typical greeting in Arabic (and a couple of other languages). However, the letters are disjoint and written left-to-right instead of right-to-left, thus completely breaking the conventions for Arabic writing.

Token sensible person Ripley is left to wipe their bumsies

Looks like we're staring lovingly up a PlayStation 2's butt-hole

The game's buggier than a big bug, bugging out in a dune buggy. 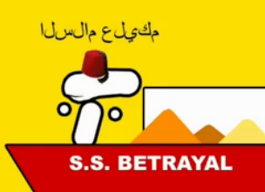 The betrayal ship has sailed, circumnavigated the globe and returned to port laden with exotic spice
Community content is available under CC-BY-SA unless otherwise noted.
Advertisement